A month ago or more I made a promise on the blog to write about my favorite neighborhoods of Barcelona. And I never forgot that promise 😉 So today I start this little project and I will call it “Ruta de los Barrios”. I have pictures and feelings of some 6-7 neighborhoods (I will use the Spanish word barrio) and I want to share them here. This is not a touristy piece, because I guess, the world is full of “5 top things to see”, “best places to eat”, especially about a city like Barcelona. And besides, I was never interested in writing stuff that is already on guidebooks, even if it looks more popular and bloglovin’ 🙂 What I want to share is my love for streets and local bars, balconies and facades, and sometimes a place where I ate and remembered that. Because I love food – and I love talking about it 🙂 So follow me on my walk, if you have the same passion for exploring the little secrets of a city!

side streets of La Bouqeria 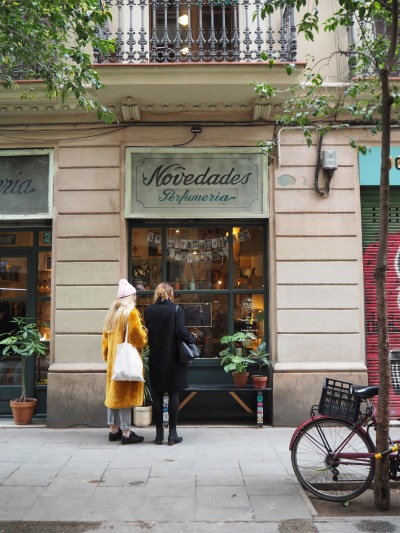 My first post is about Raval, because it was my first destination. Not because it is the top or the best, it just happened that way. My inspiration to visit Raval comes from following an Instagram account of @mglenriquez who takes great street shots and many of them are in Raval. His is not glamorous and touristy style, it is more of raw human experience – just as Raval is itself. 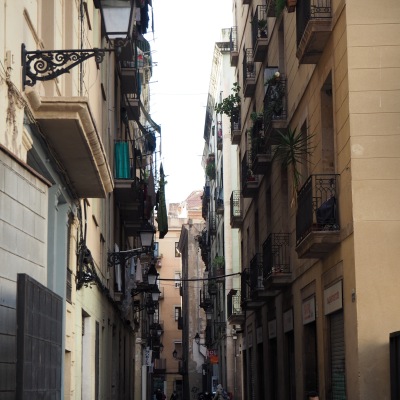 It is a strange barrio, and not to everyone’s taste. Very central, just on the right side of La Rambla (if you are facing the sea), but not as popular as the left side, Barrio Gotic. Well, it is not as old as Gotic, but also because it has a bad reputation of a quarter for the prostitutes, foreigners and shady individuals. Nowadays, however, Raval is going through gentrification and is changing this profile. That image is in many heads of the locals, and as I was walking with my Barcelona-born man he would be very like: “don’t stop here”, and “let’s not go this little street”. But he himself says that Raval is not as dangerous and bad as it used to be years ago. It is not polished and glamorous like other parts of the city. But I like its authentic, not-spoiled-by-tourism vibe. It gives me a feeling of how Barcelona used to be, before it was turned into the attraction of massive tourism. 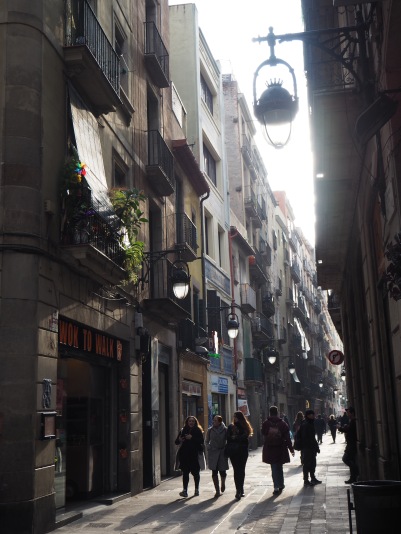 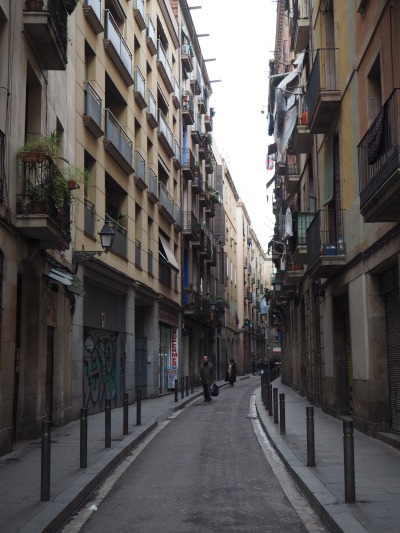 the lines of Raval

Though Raval starts just behind the famous food market La Boqueria, there were not so many tourists wandering with cameras. Which made it perfect for me to wander with my camera 🙂 I would not maybe rent a flat in Raval, but I would definitely recommend to walk its streets and look inside its bars, both during the day and in the evening. Many of them are modern and hipster, and there are many of them.

a cheap and juicy snack

that choice makes me envious 🙂

The food part. We were so lucky to discover Kinoteka (which function I didn’t understand) and the restaurant La Monroe that it houses. The place is kind of alternative and hipster, and they serve great food for cheap local prices (we had menu del dia for some 12 euros, which includes the first, the second, desert and a drink). I was carried away by the creamy vegetable soup and a seafood risotto in combination with red wine. This was not the food you find on every menu in Spain, and I appreciate such things a lot.  I would definitely return to La Monroe on my next exploration walk around Raval. 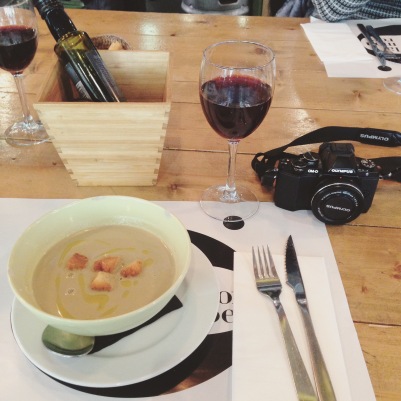 Things that make me happy

Next on my tour is neighborhood of Gracia which some of you may know. It is more popular with tourists, it is young and hipster, and full of life.

Do you have your favorite neighborhood in Barcelona? Share it in the comments below!

P. S. Aren’t they lovely, these shops and bars of Raval?

plenty of food places in Raval

some colorful bar in Raval